“Yes, I have finally arrived to this Capital of the World! I now see all the dreams of my youth coming to life… Only in Rome is it possible to understand Rome.” -Johann Wolfgang von Goethe, German poet

Rome; The Capital of Italy; The Eternal City; The Center of the World! Packed full of 3,000 years of history, Rome once housed the most powerful ancient empires in the world and is now home to the awe-inspiring ruins and art that live on to tell its story. The city is a breathing, living, and at times dizzying, time capsule that requires planning to ensure you don’t miss a single magical moment. As the saying goes, Rome wasn’t built in a day – so seeing Rome will require a bit of VWT magic. Here is a sneak preview into your bucket list Rome itinerary and the luxurious places waiting to host your stay.

If all roads lead to Rome these sites are the final destination. Let an expert show you around this living museum so that you aren’t distracted like a kid in a candy shop. A guided tour will start in the underground tunnels of the Colosseum – a large portion only discoverable with a special guide. From here, stroll the Roman Forum, once the social and political center of the city, discover temples, the infamous Palatine Hill, Constantine’s Arch, and believe it or not – a whole lot more. 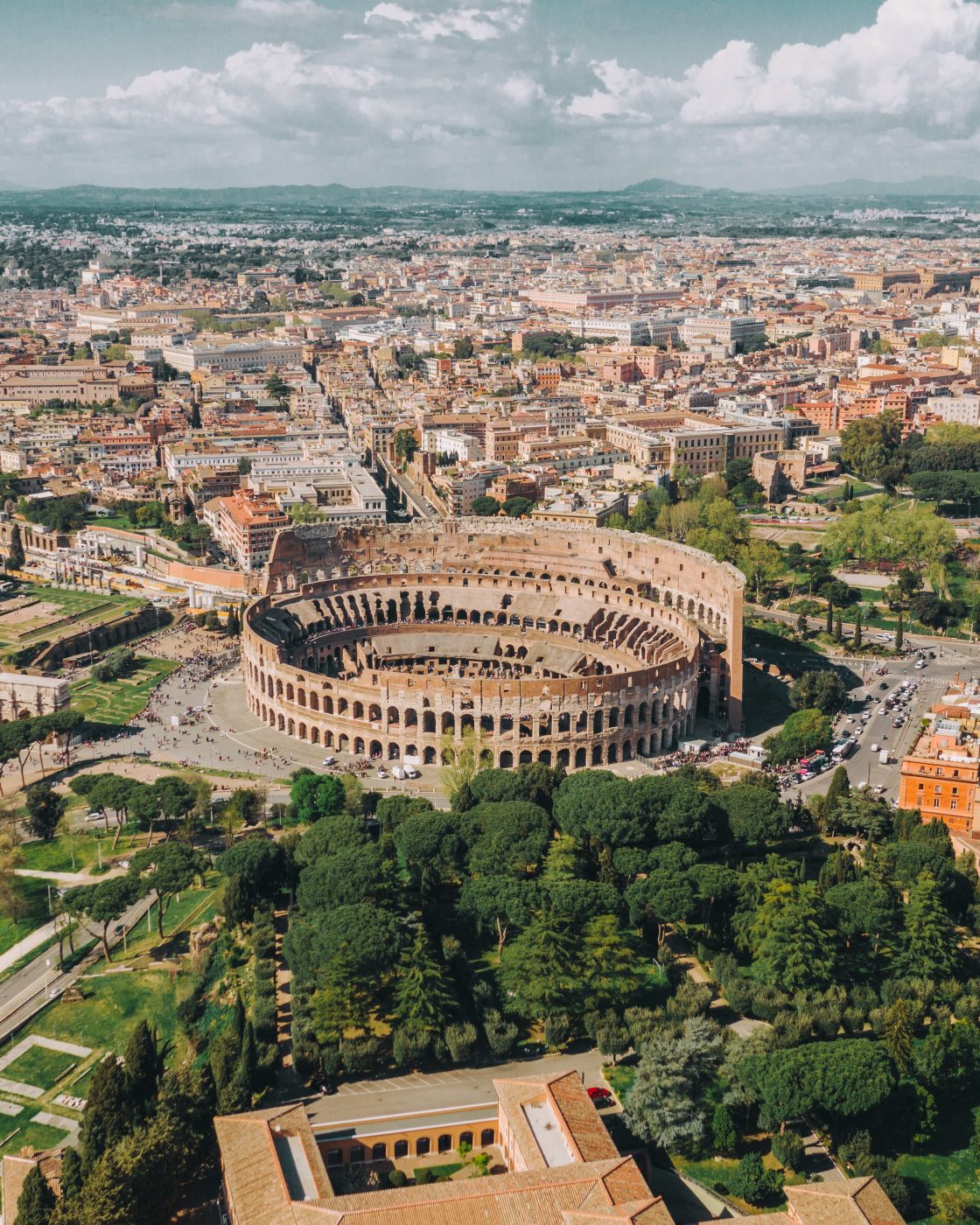 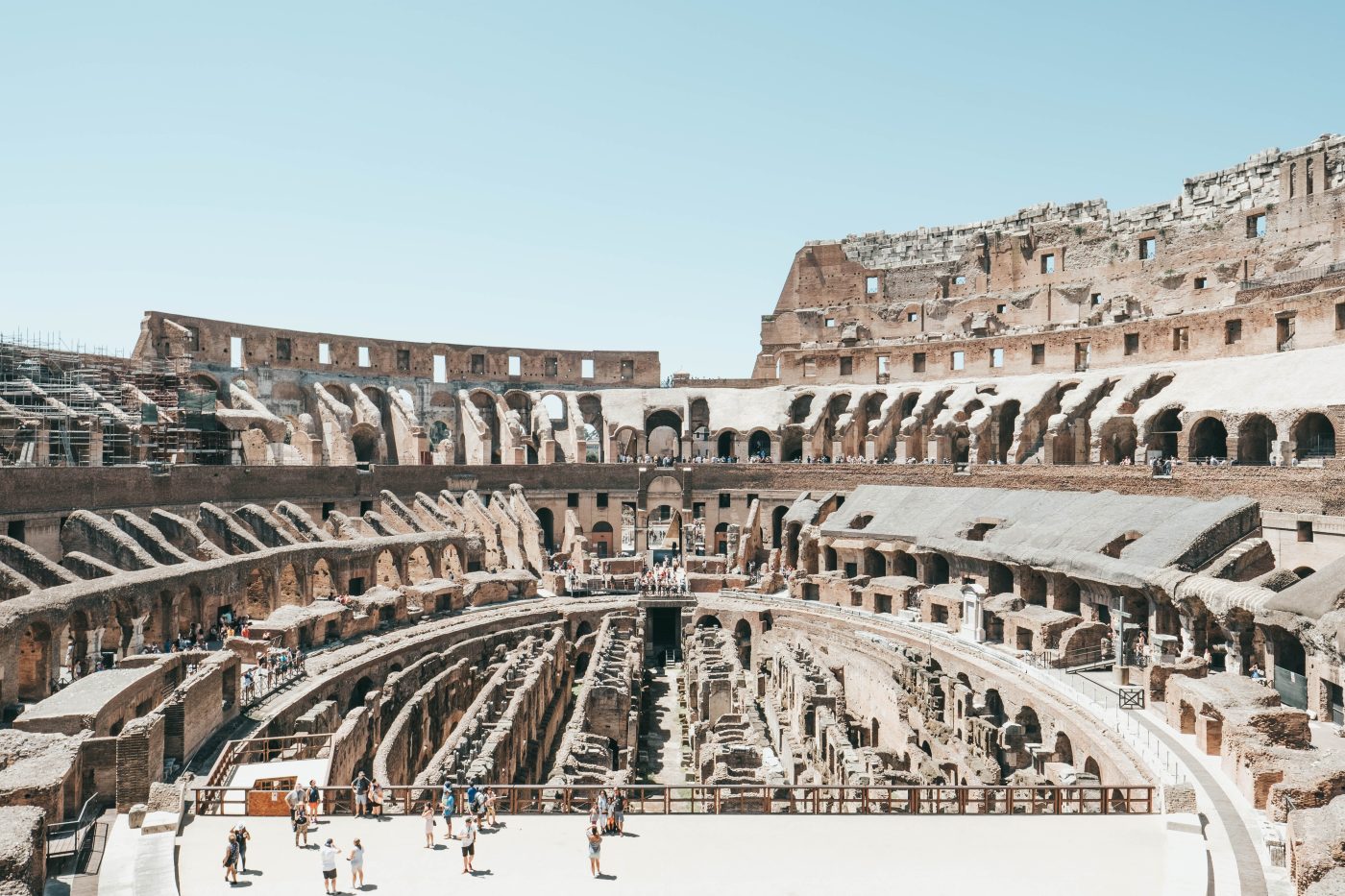 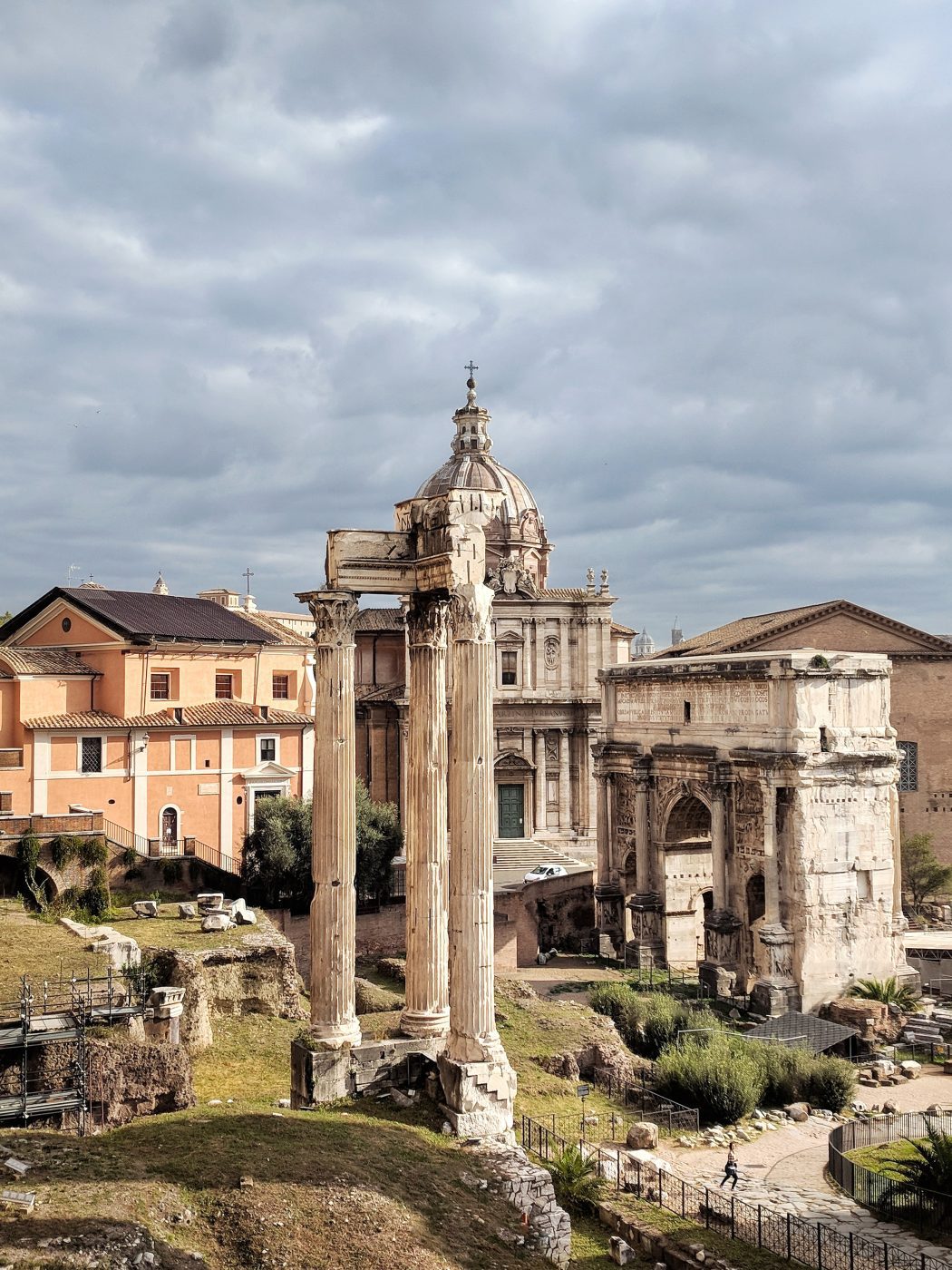 A day trip to Pompeii.

Pompeii is arguably the most famous archaeological site in the world. Located in western Italy, the city was buried under four to six meters of volcanic ash and pumice in the eruption of Mount Vesuvius in AD 79. From Rome, embark on a luxurious full day excursion starting with hot coffee and cookies aboard a private sprinter van. Walk around Pompeii, Macellum, and the Thermal Baths with a stop for lunch at the stunning Bay of Naples. An off the beaten path itinerary shows the parallels between Roman life frozen at the time it was buried and the way the city carries on today. 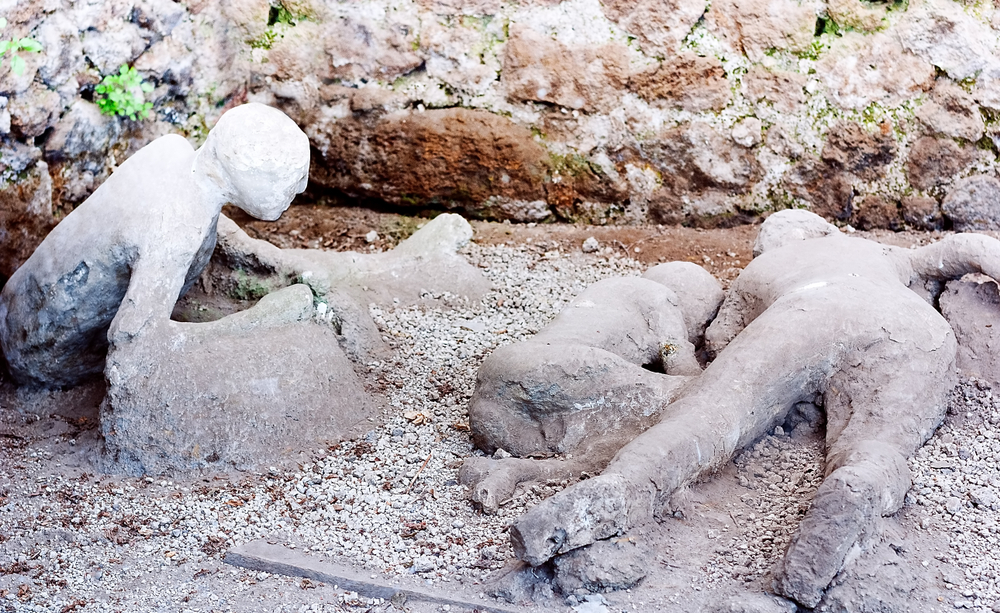 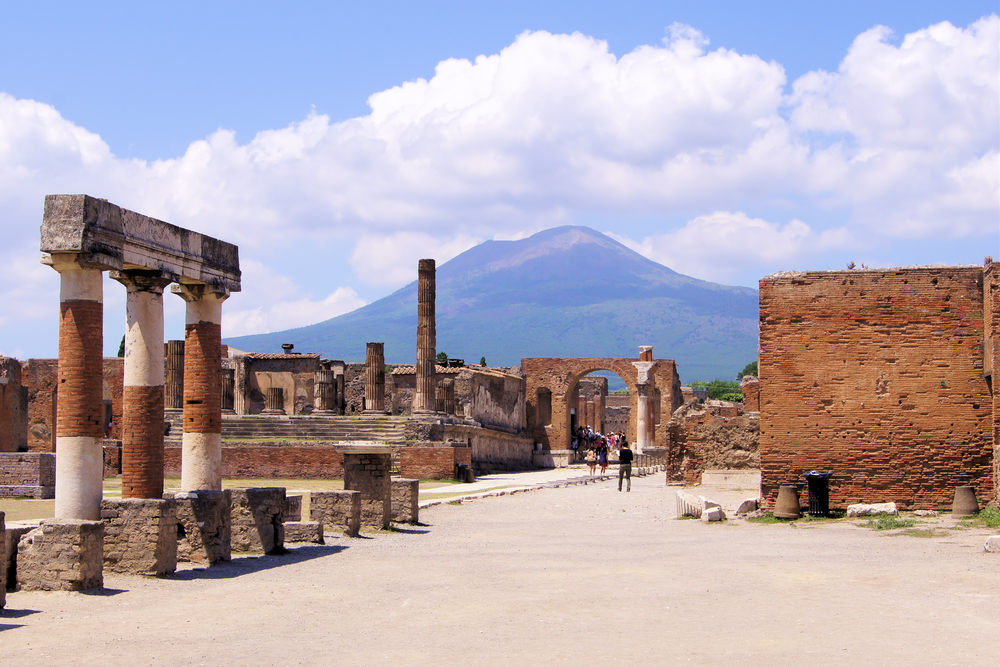 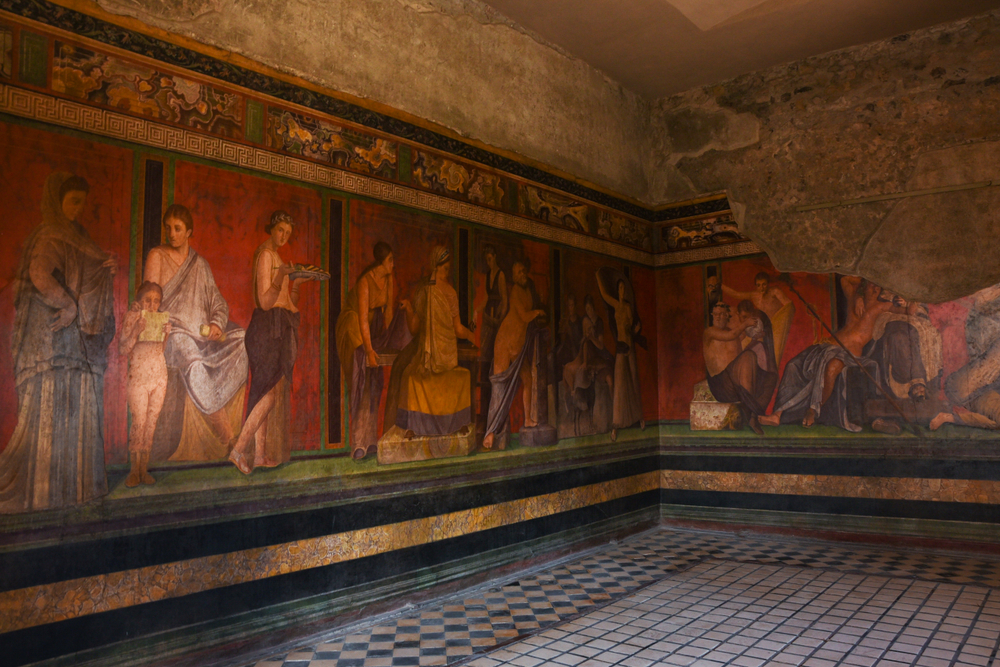 Fully embrace spooky season by touring an underground burial vault situated beneath a medieval church containing the remains of 3,700 Capuchin Monks. Called the “Bone Church of Rome”, the crypt’s six rooms sit beneath the mass chapel, a stark contrast to what sits below, but a worthy visit showing key insights into the birthplace of Catholicism. This shocking and fascinating spectacle is a memento mori – reminding us all of the inevitable immorality of humans. 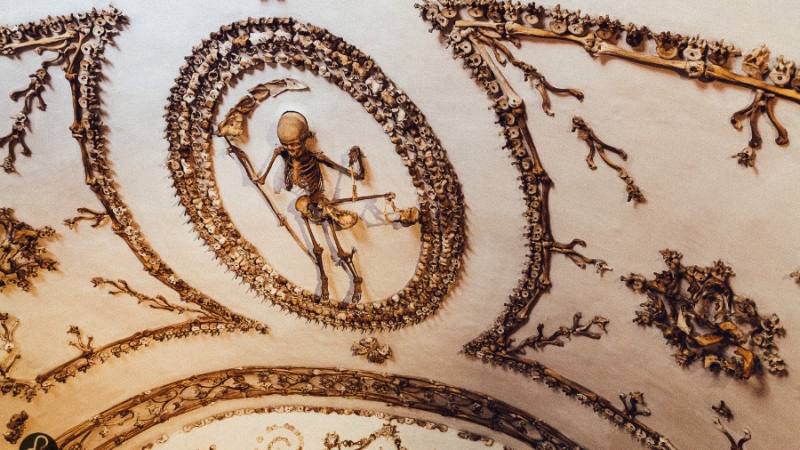 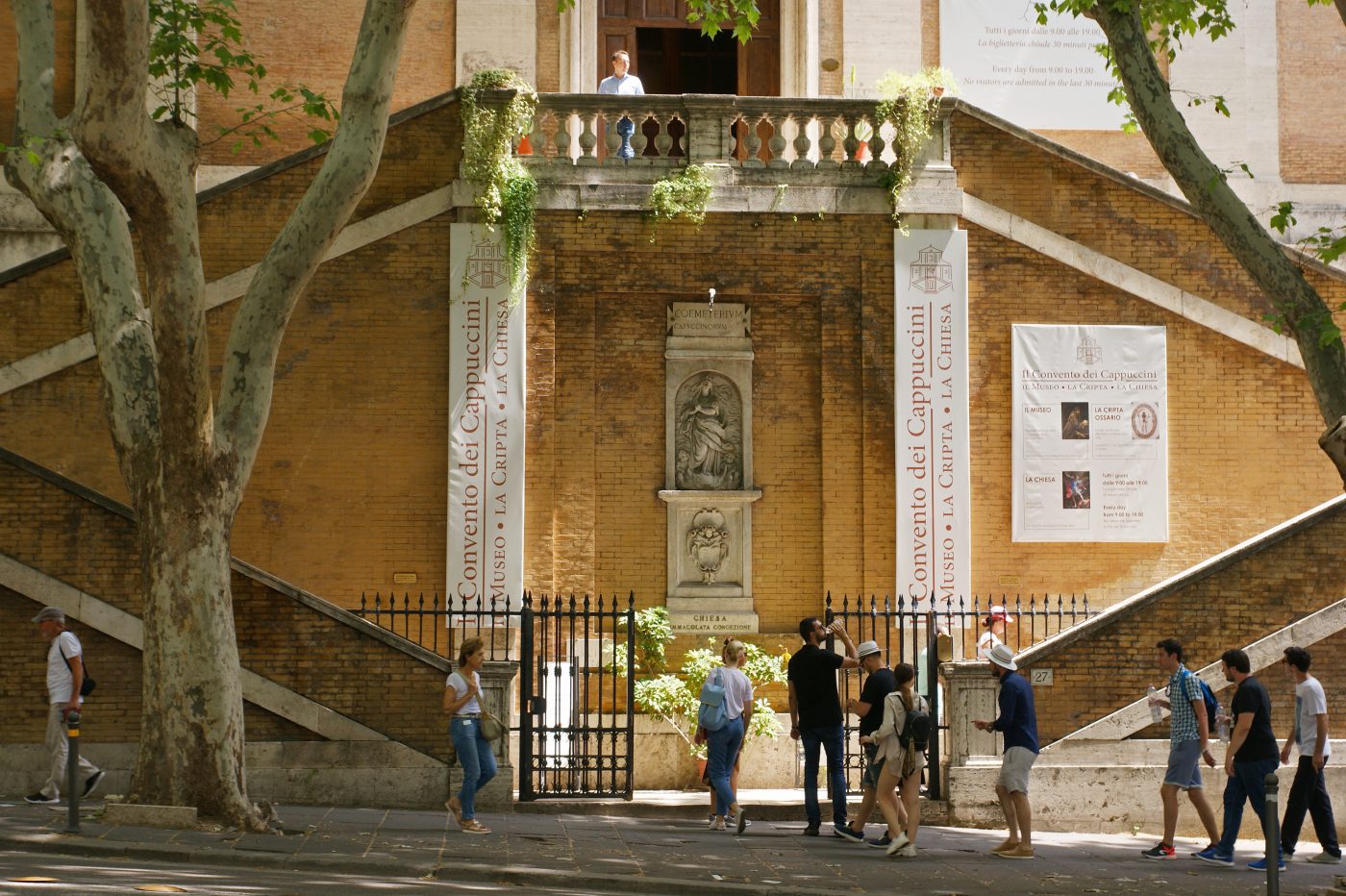 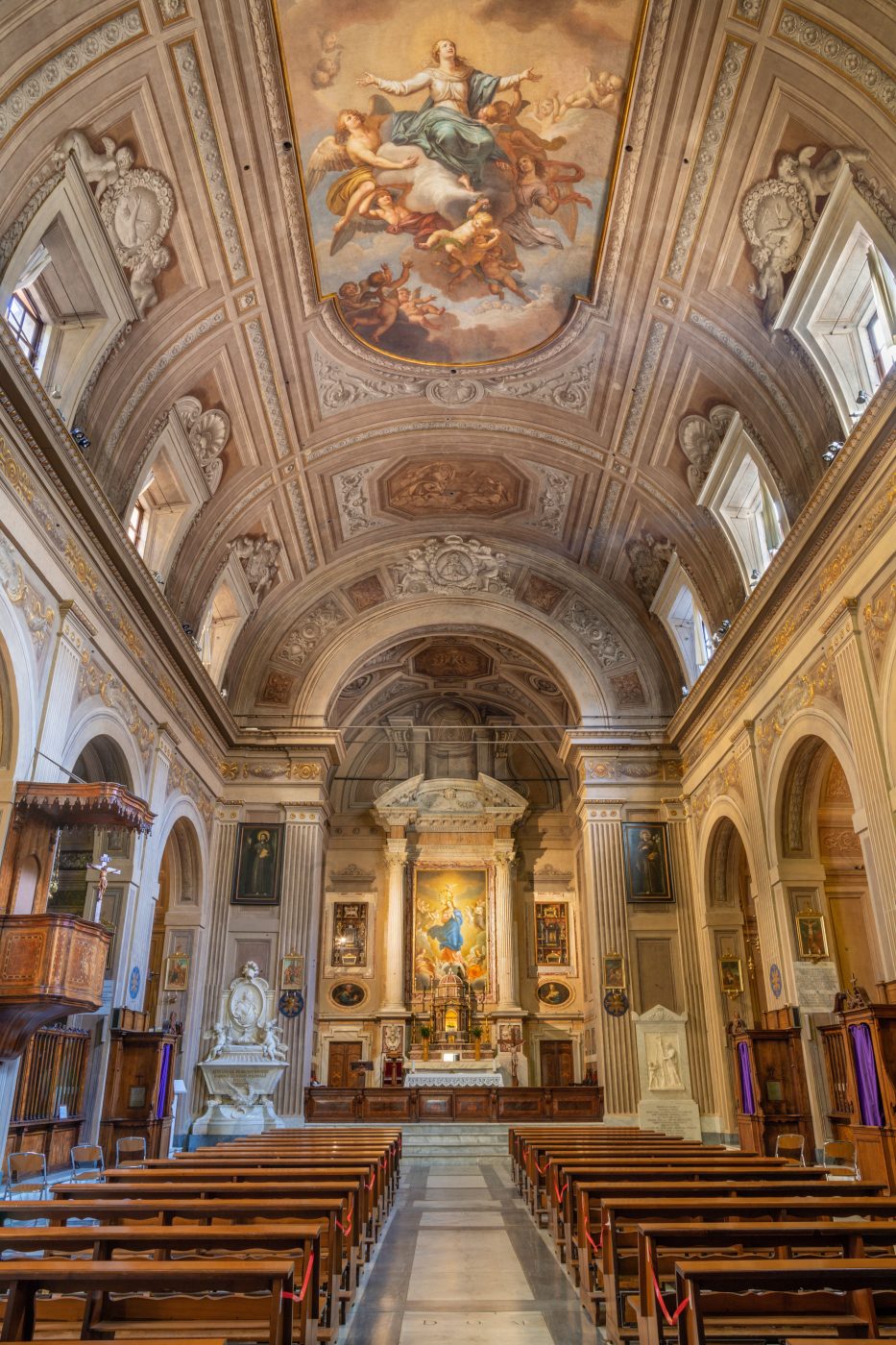 “From the dome of St. Peter’s one can see every notable object in Rome… He can see a panorama that is varied, extensive, beautiful to the eye, and more illustrious in history than any other in Europe.” -Mark Twain, American Writer

If you have glanced at Rome’s skyline, you have seen St. Peter’s Basilica. The largest church in the world is considered the holiest shrine of the Catholic Church, built on the apostle, St. Peter’s, tomb. The basilica is full of amazing art, notably home to Michelangelo’s famous Pietà – a marble statue depicting a grieving Mary cradling the crucified Jesus. 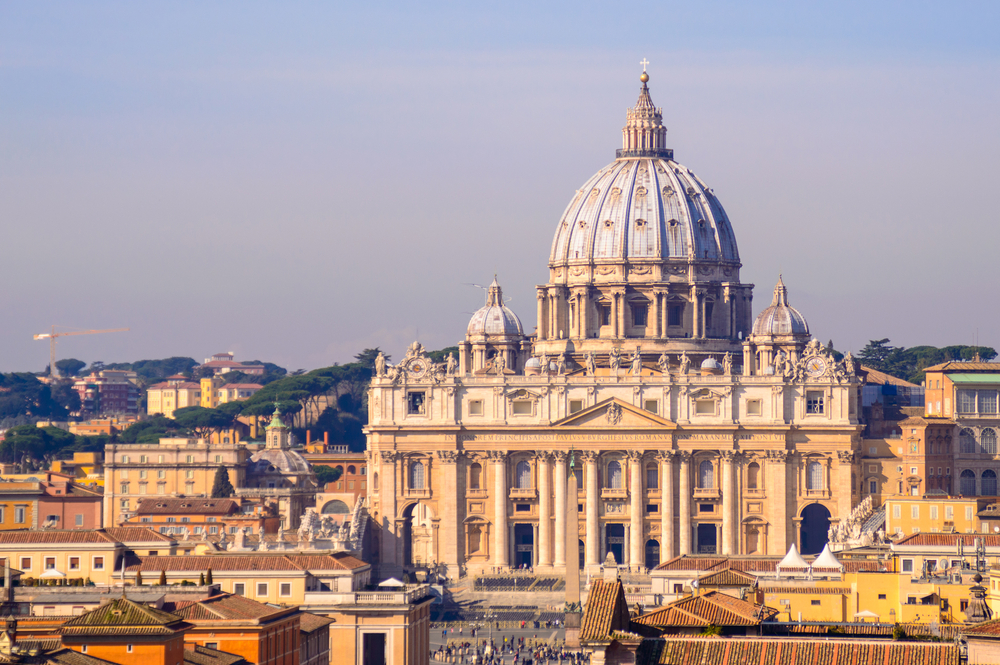 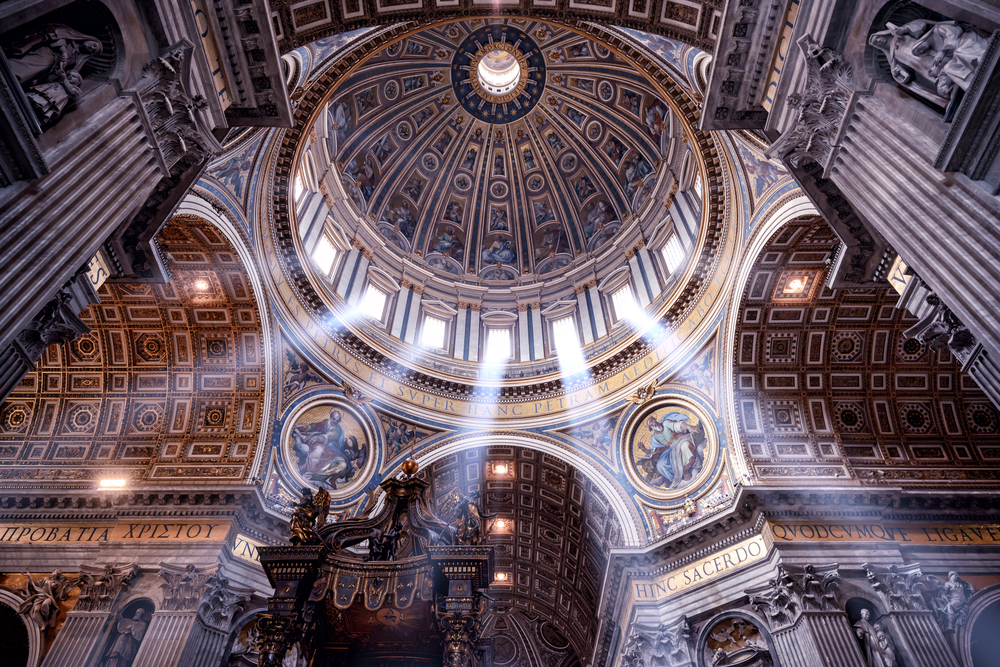 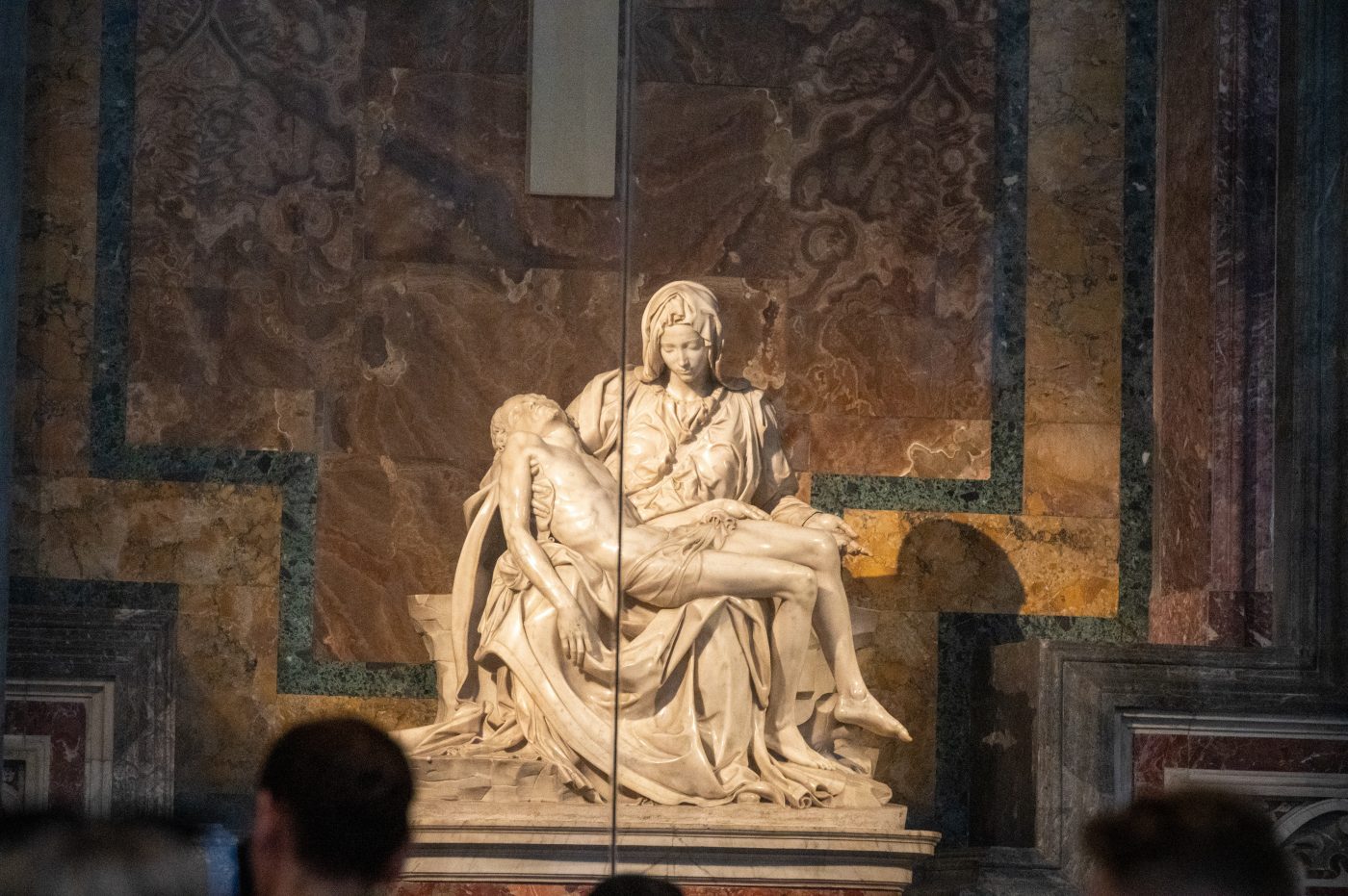 Sitting at one of the most enviable locations in the city center, Anantara Palazzo Naiadi Rome suspends over the ruins of the Baths of Diocletian within walking distance from the Trevi Fountain, Spanish Steps, Via Veneto, and more iconic destinations. The crescent-shaped palazzo showcases nineteenth-century marble architecture housing 238 rooms – all with a view of the baths, the Basilica of St. Mary of the Angels and the Martyrs, and the Naiadi Fountain. The hotel’s scenic rooftop features a pool and Sky Terrace Bar Lounge & Restaurant – but the real star of the show is the one-of-a-kind view of Rome at dawn and dusk. 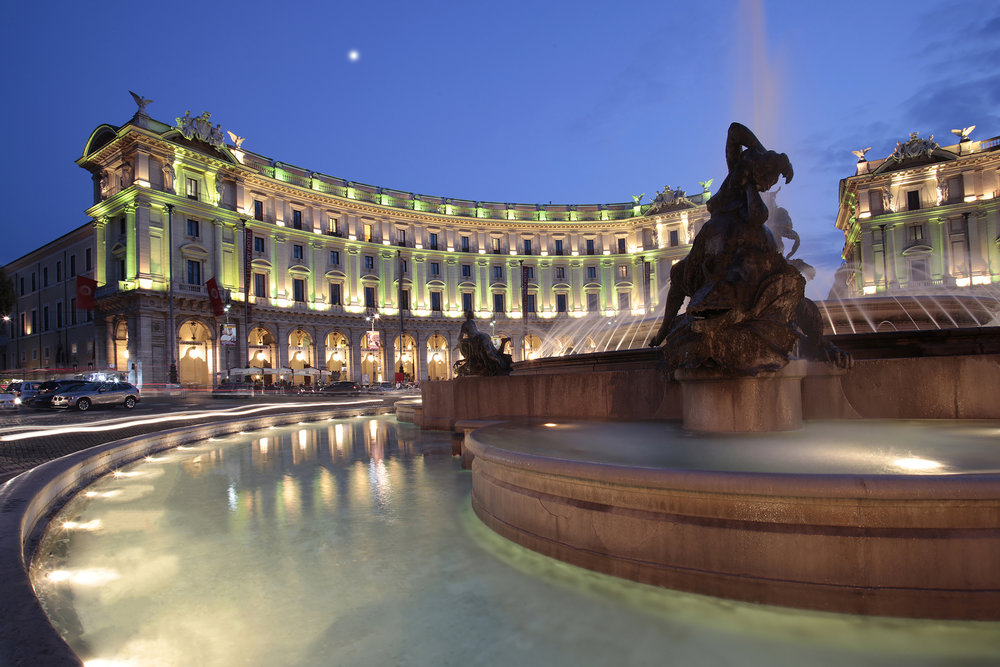 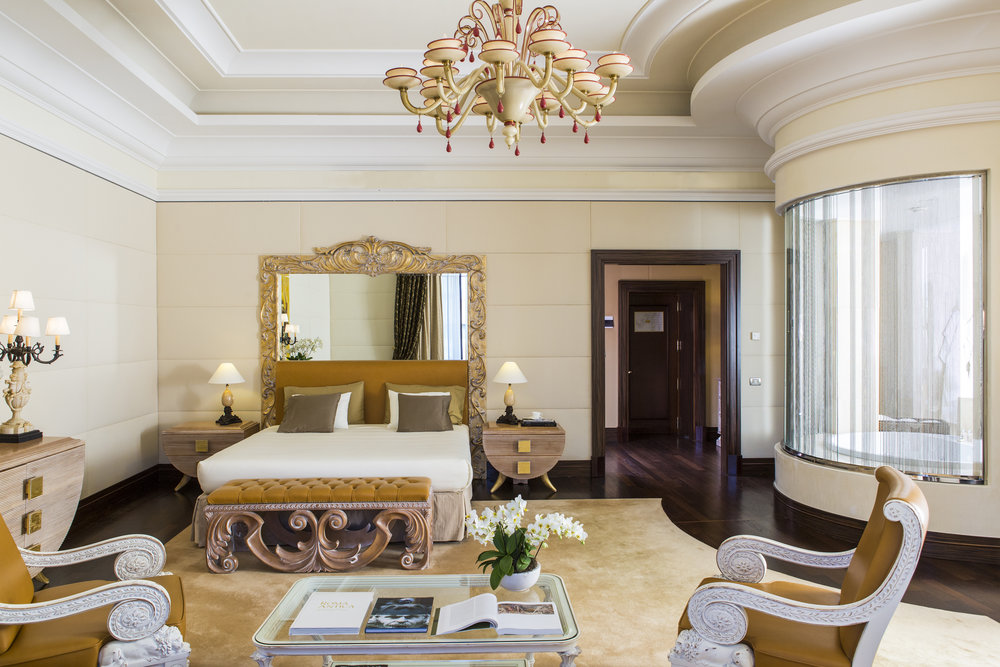 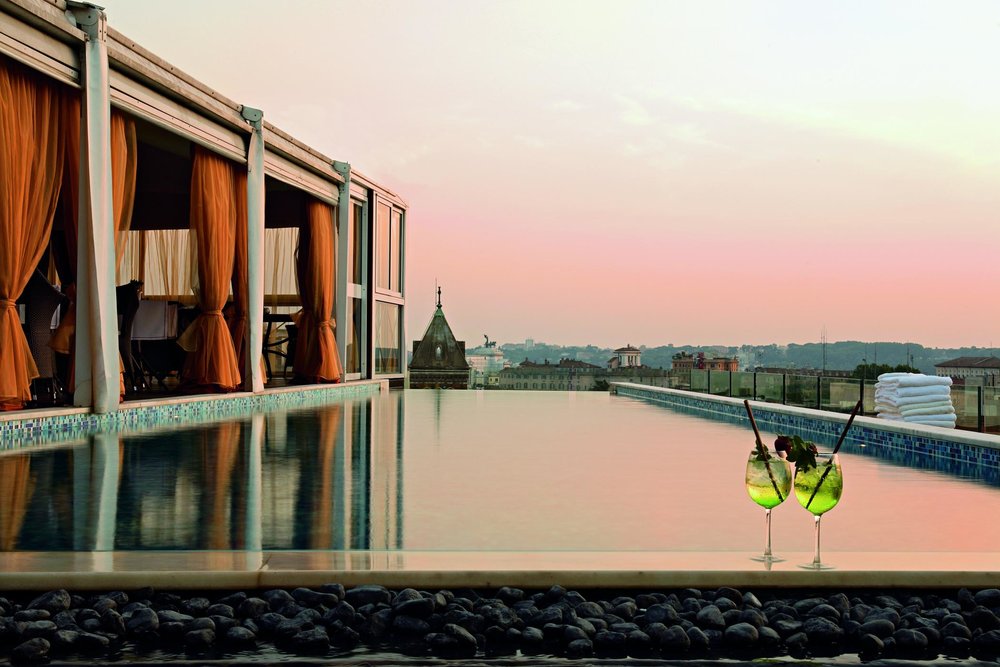 A ten-minute walk from the Spanish Steps on one of the most expensive streets in Rome is Baglioni Hotel Regina. Rooms embrace the feeling of “Dolce Vita” fitted in an original Art Deco style with exceptional views of the Colosseum or Sistine Chapel. The hotel’s Brunello Bar and Restaurant has its own exclusive entrance on Via Veneto and is one of the best in Rome. If you are looking for things to do in the city, Baglioni Hotel Regina has you covered with experiences ranging from a cooking class in your penthouse, a meeting with a local sculptor, or a ride around town in a vintage Fiat 500. 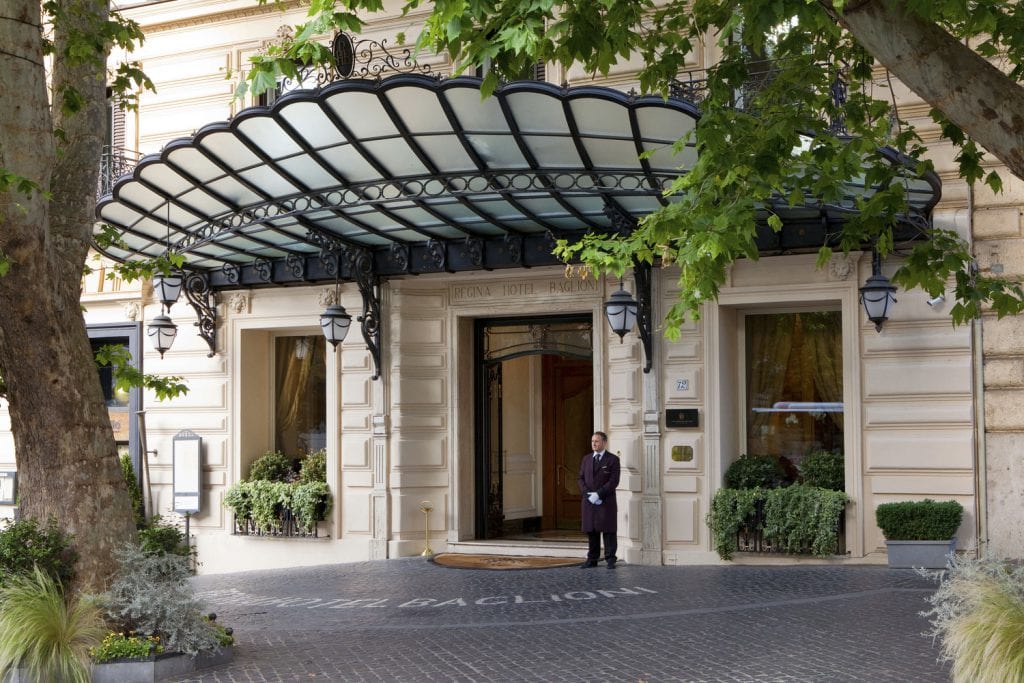 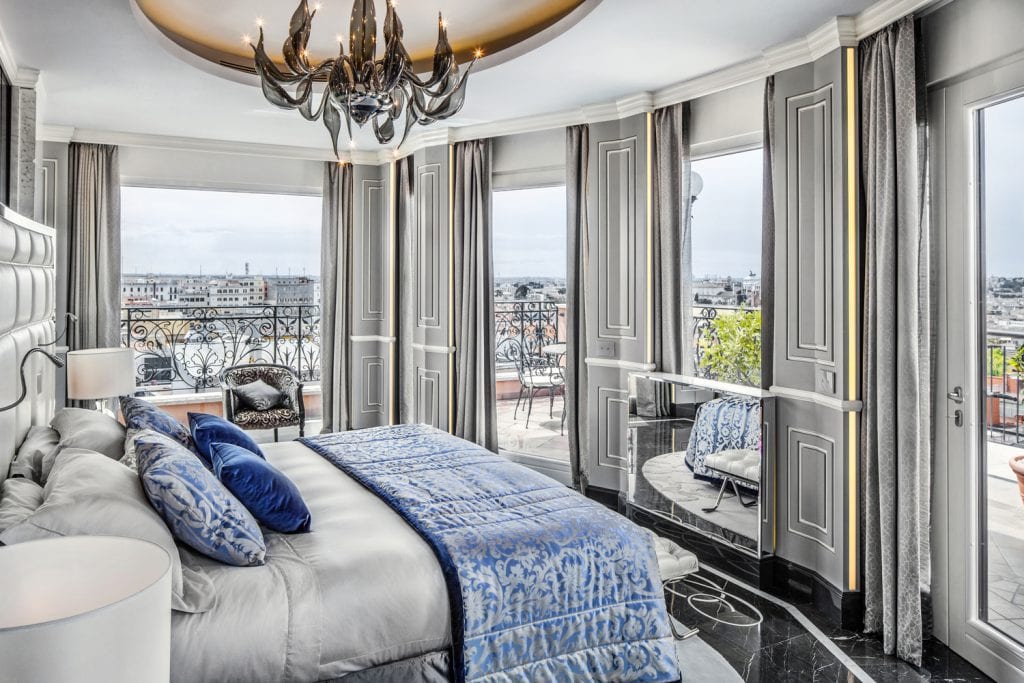 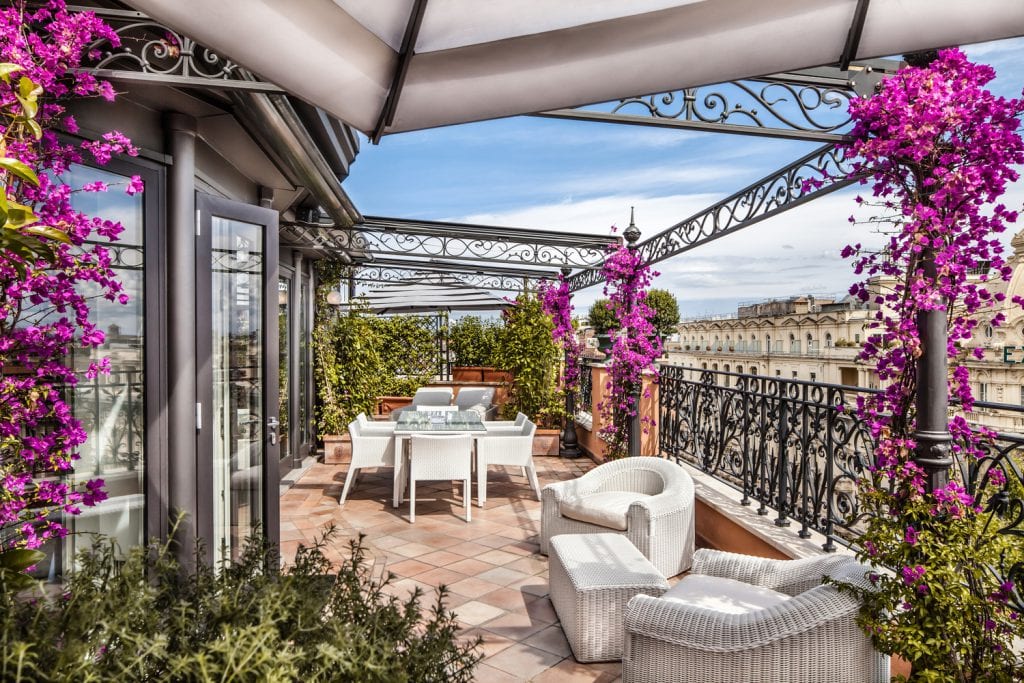 Sitting atop the Spanish Steps is one of the oldest hotels in Rome, now a modern icon and hot spot for celebrities and European aristocrats looking for a sophisticated escape with sweeping views. The newly renovated eighteenth-century palazzo is decorated with rich wood and marble housing 104 luxurious rooms and suites. Wake up to views of the hotel’s inner courtyard or overlook Via Sistina – an iconic sloped street away from the crowds of the Spanish Steps full of stunning architecture, shops, and restaurants. The hotel is home to the stylish Mosaico Restaurant in the hotel’s charming courtyard, and the Cielo Restaurant and Bar located on the glamourous rooftop terrace. There is no better place for drinks and views in the city! 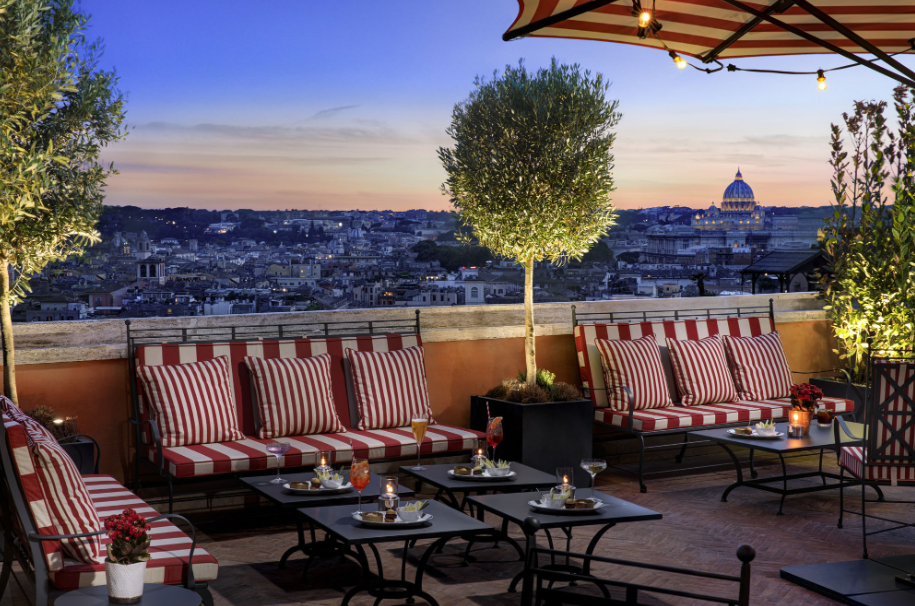 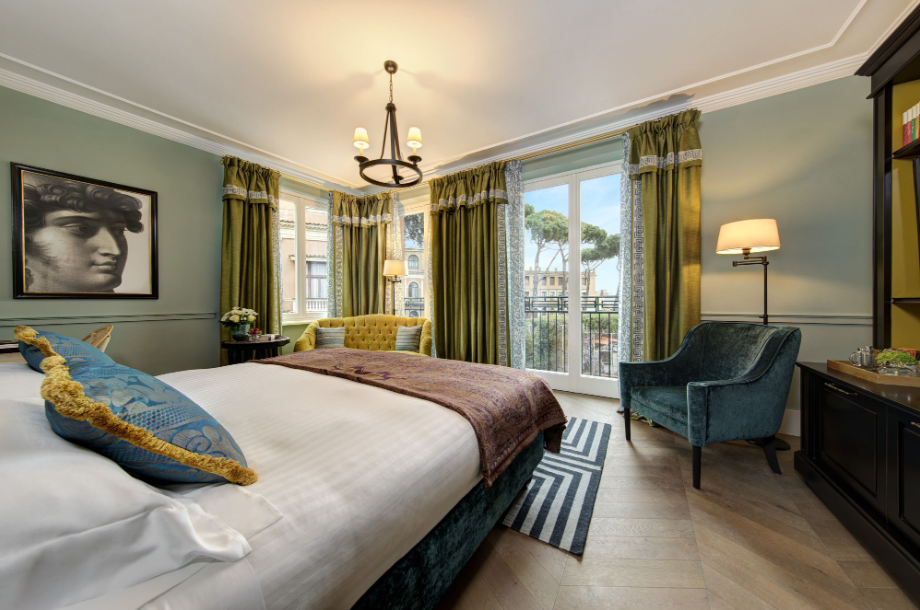 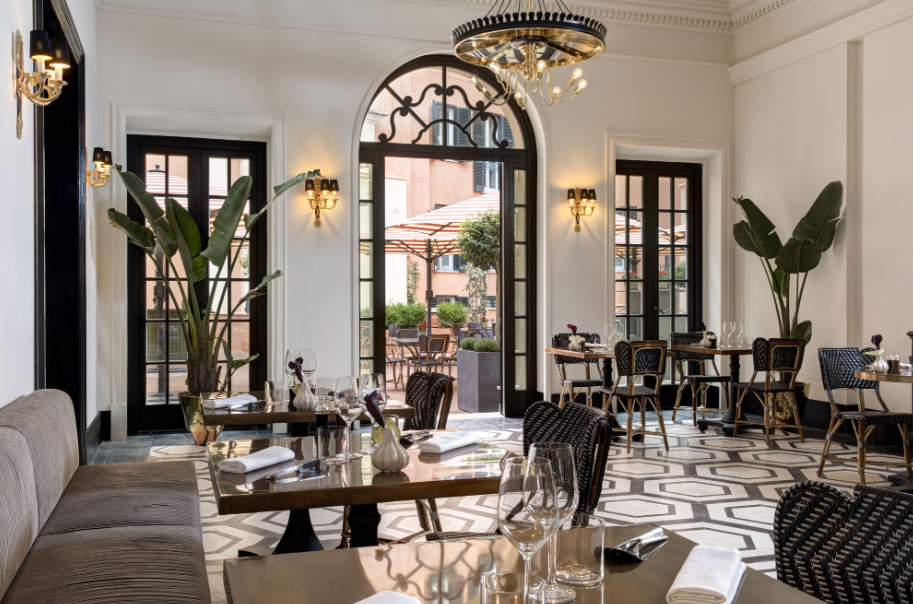 Lovingly called “paradise on earth” by the French Poet Jean Cocteau in 1917 and frequented among various writers, stars and politicians, Hotel de Russie is still magical and endearing as ever. Located in an ideal location between the iconic Piazza del Popolo and Spanish Steps, classic Rome and cosmopolitan buzz come together to form the ultimate urban retreat and one of the top places to stay in Rome. 121 classic yet contemporary rooms and suites overlook Rome’s picturesque terracotta rooftops and the hotel’s Mediterranean tiered Secret Garden. Smell the rose bushes, orange trees, and mature pine while listening to the hum of a waterfall dreaming of the cocktail to be had at the hotel’s award-winning Stravinskij Bar under the stars. 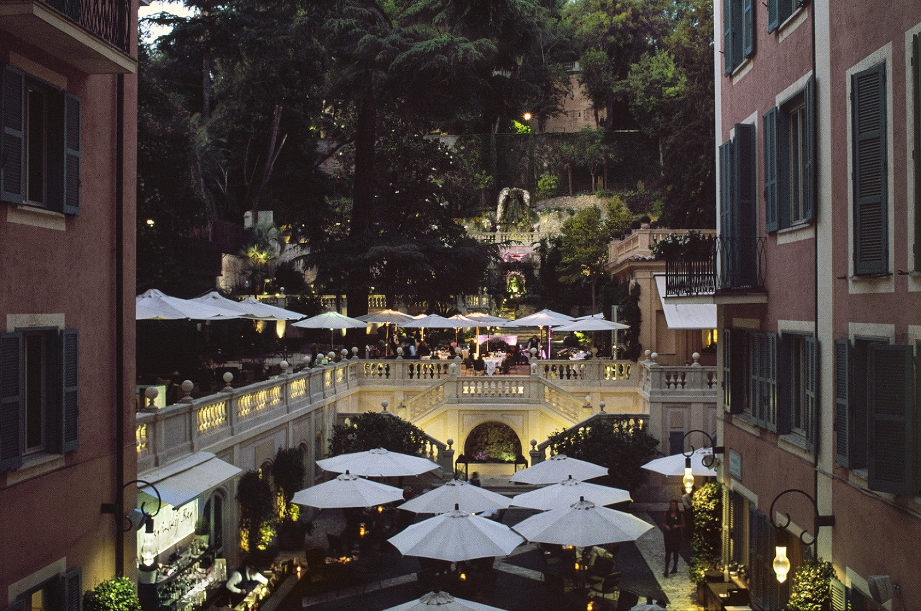 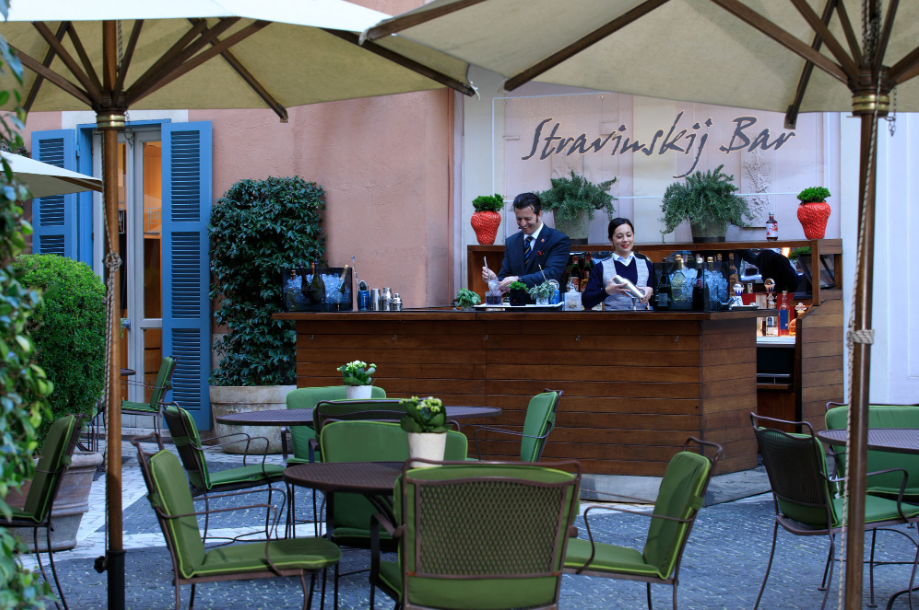 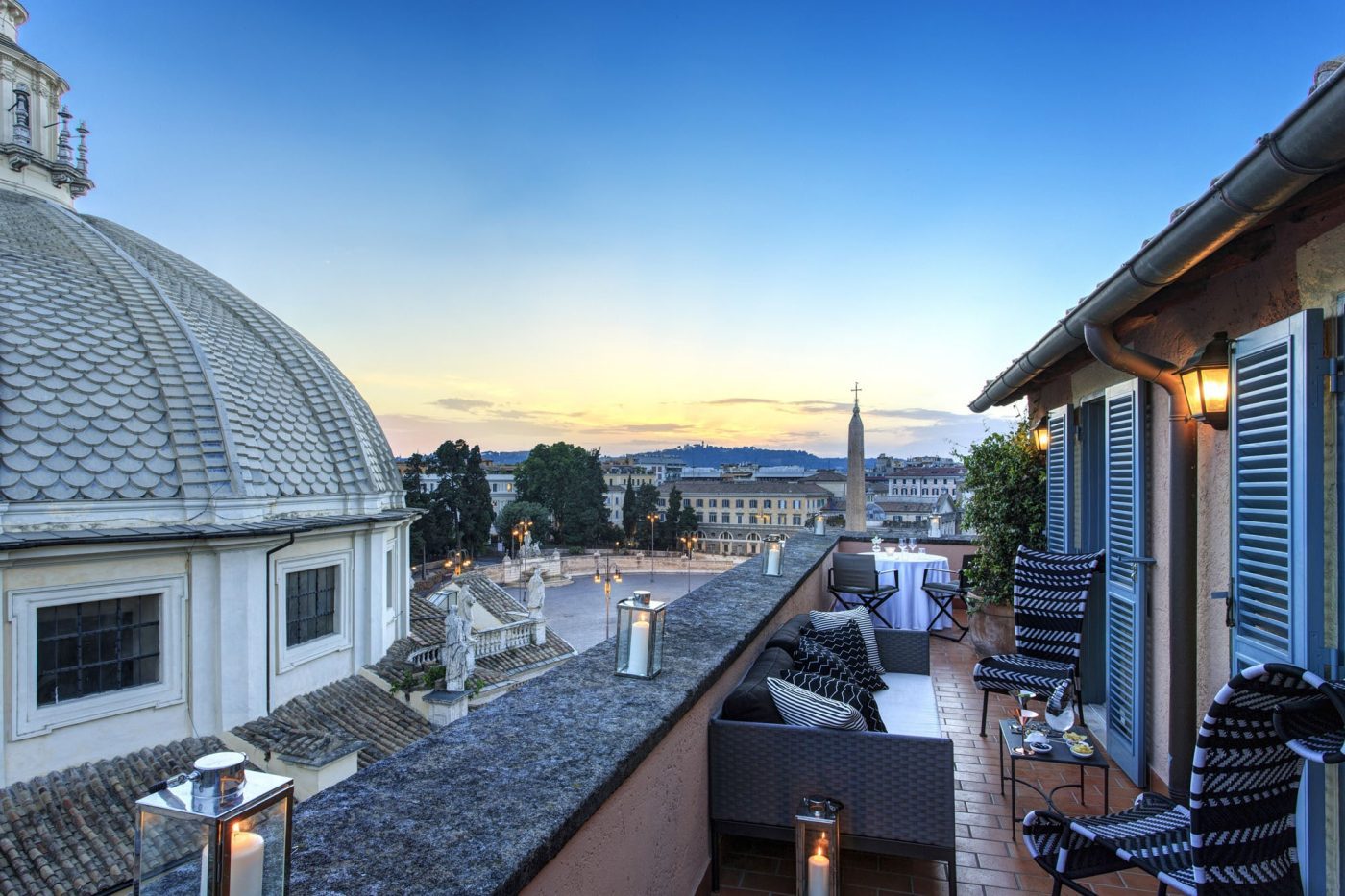 Located at the top of the Spanish Steps, Hassler Roma is a legendary five-star Rome luxury hotel. The hotel is owned and managed by Roberto E. Wirth, a fifth-generation member of a famous dynasty of Swiss hoteliers. Elegance, style, and the highest quality of service have made the Hassler the very symbol of international hospitality, making it the preferred destination of VIPs from all over the world. In addition to its ninety-three rooms and suites, the hotel’s newly refurbished panoramic one-Star Michelin Imàgo restaurant offers a breathtaking view over the city of Rome and is the meeting place of choice for important personalities and celebrities both international and local. 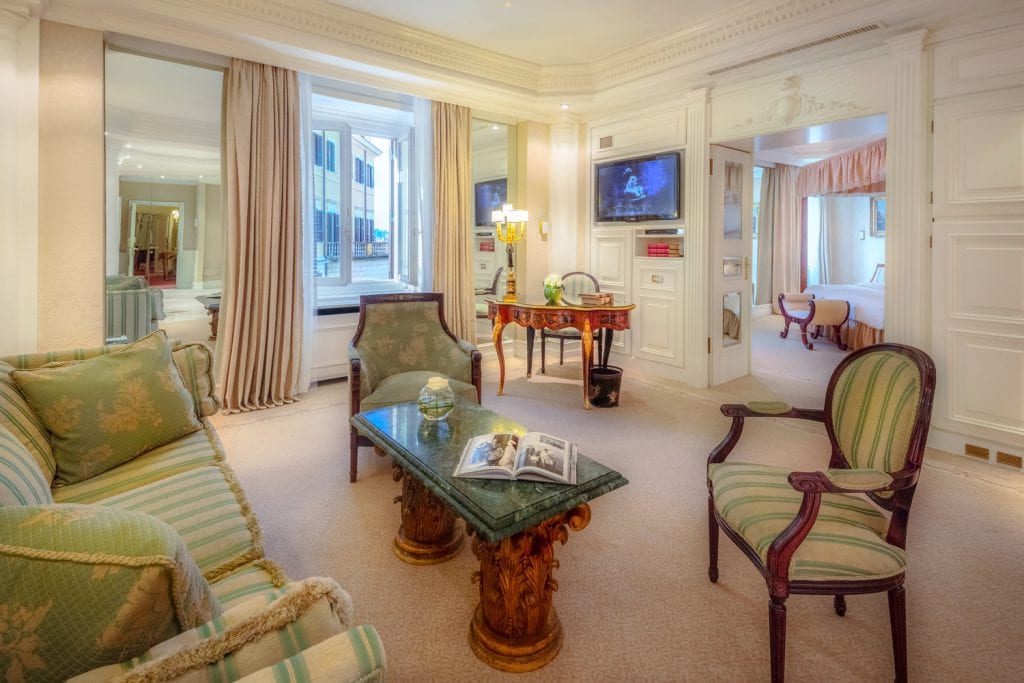 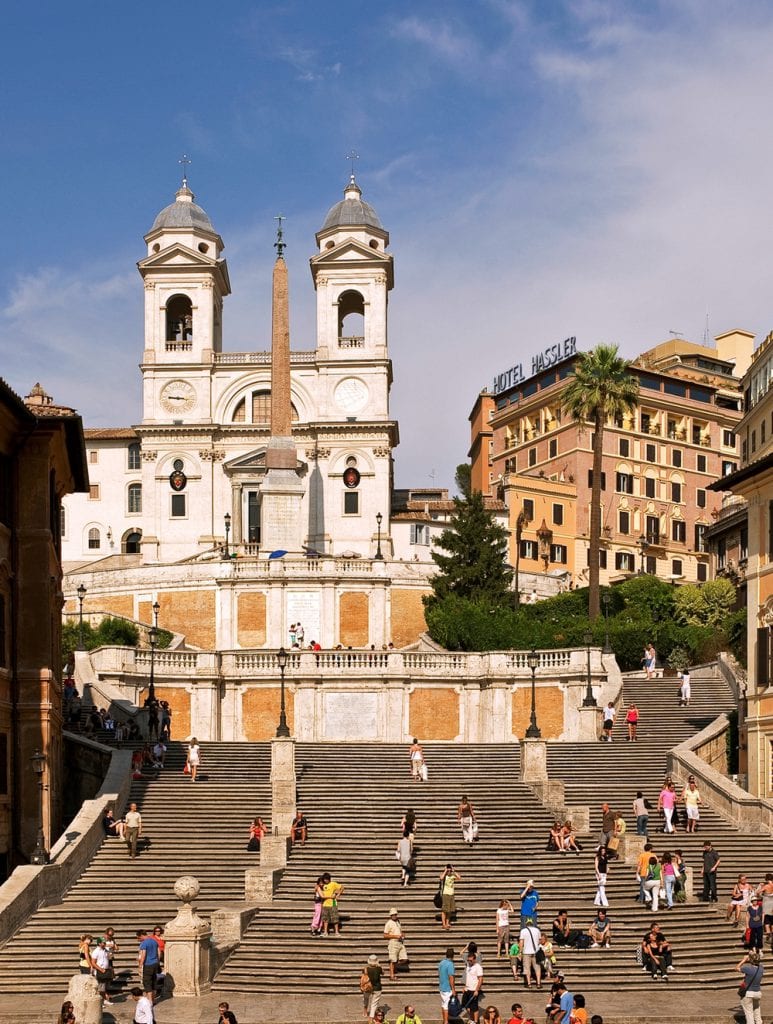 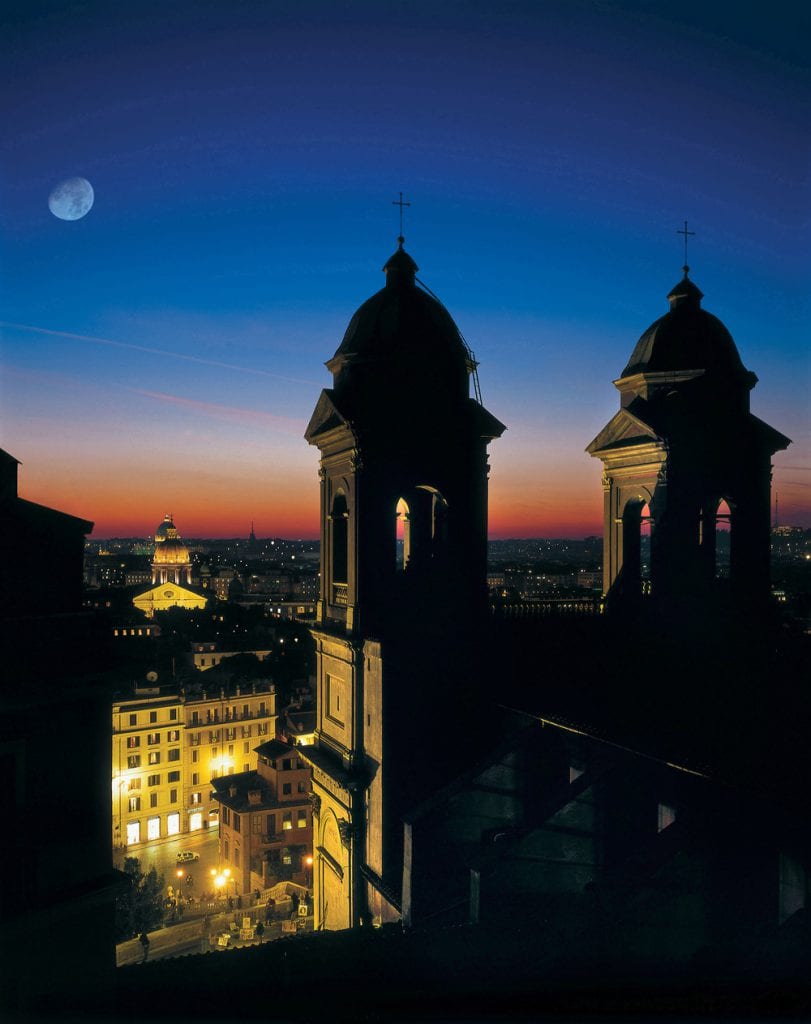 The properties shared above are a part of our Valerie Wilson Travel Suite Access™ portfolio. Learn more about VWT’s Suite Access program here.

Ready to plan a trip to Rome?